I’m really not a very into comedy specials, but after seeing some clips from ‘Bo Burnham: Inside’ online I decided to give it a watch, lots of my friends like his comedy specials, and he’s unarguably an extremely creative and funny person. I absolutely did not expect what it ended up being, and I did not expect at all how it would affect me. And while I absolutely would recommend it to anyone (it is genuinely really funny and mostly relatable), I can recognise that only people who experience the internet and social media as core a part of their existence will get the full value out of Inside. 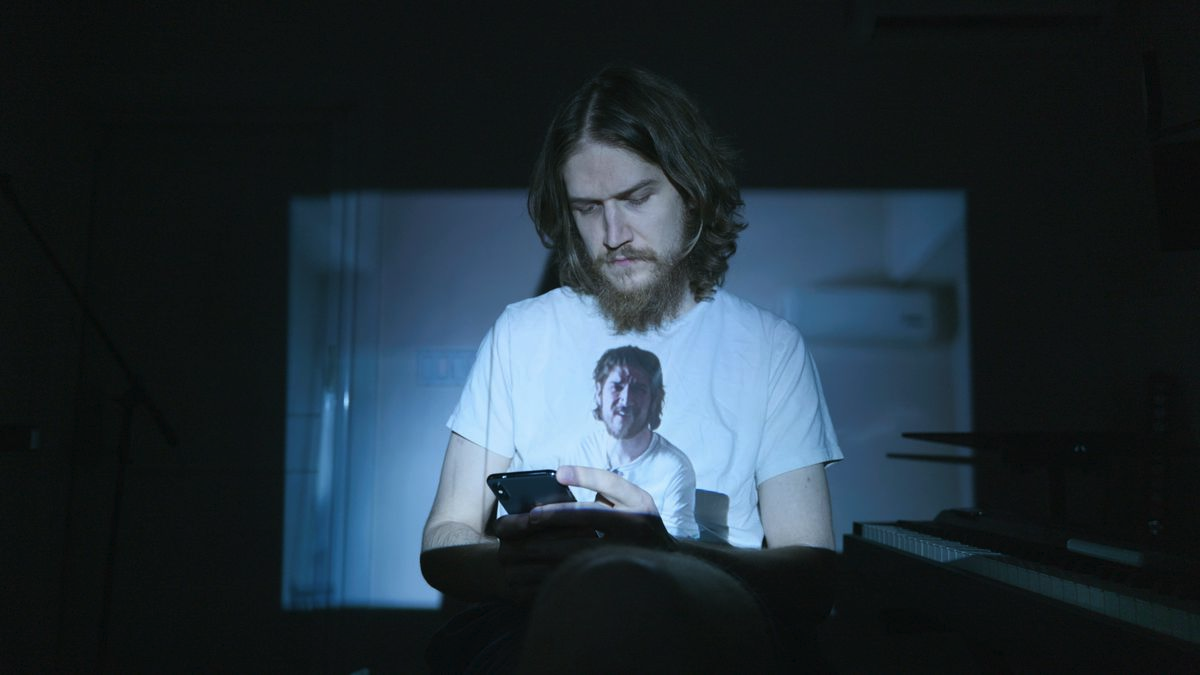 The premise of Inside is incredibly similar to so many pieces of visual media of late - “we are all stuck inside our homes, how can I express how strange this is?”. Where Inside excels is the sheer creativity of how Burnham uses the tiny space he is given to create the simultaneous illusion of new spaces (and therefore retain viewer interest), but also the claustrophobia behind the illusion. Burnham uses a projector facing a single wall surrounded by equipment and transforms it into a variety of interesting cinematic frames using nothing but a few colour profiles and relatively generic imagery - phone screenshots, texts, emojis, various effects. For that alone I feel that it’s a must watch for any visual creative. He uses light in such an incredibly impressive and creative way to say so much so efficiently. I mean it makes sense, he comes from a stage performance background (and thats technically what this might be categorised by most), but that makes it more impressive that he’s able to translate his knowledge of staging and light, and transfer that over to film & framing so incredibly well.

(SPOILERS!) Here’s a video that goes into a little more detail on this, also Now You See Me is just generally a good film essay channel, would recommend:

As Now You See It mentions, Inside is “funny” in both senses of the word, funny as in humorous, but also “funny” as in “out of the ordinary, odd”.

I won’t go into too much detail here, but the lyrical content of the songs, because again, spoilers, but he takes current frustrating topics like wealth hoarding, internet addiction, the intersection of how technology both can be good for connecting people and where it just isn’t enough, conforming to society, wanting to do good but not knowing how, feeling powerless, deteriorating mental health, all without being too controversial (though it is often at times uncomfortable to watch), and quite funny (unless you hate hearing the word “white”, that is), it is a comedy special after all.

The overarching plot feels like it could be an extension to No Exit, a play by philosopher Jean-Paul Satre. In No Exit the basic premise is that there are 3 people stuck in a Hell, they expected to be punished for eternity, but it turns out that Hell is just a simple room that none of them can leave. Over the course of the play, the characters clash, and wear each other down, such that when the protagonist, Joseph Garcin is offered a way out of the room, he cannot bring himself to leave. The common interpretation of this is that “Hell is other people”. This exact same event happens during Inside, halfway through the special the door outside of Burnham’s “room” is suddenly open and Burnham just watches it, then closes his eyes. The genius difference is that Burnham doesn’t need other’s to mentally subdue him, this short scene shows that he’s unable to bring himself to leave his own mental torture. Over the course of the special, Burnham is overly-self reflective, having entire songs about how he feels that he’s done things wrong in the past and doesn’t know how to reconcile, even silly things like wearing an Aladdin costume as a white person, leading to his eventual No Exit moment, and onto an unfortunate explosive mental self-destruction. The second half of the special can be hard to watch, but it’s also relatable (unfortunately). I feel like what Burnham experiences and puts on show is the kind of feeling I’ve had for years. I’ve always felt isolated, sometimes physically (and often of my own accord), but often socially, far before any lockdowns or pandemics. I should probably see a therapist about that but here I am writing this blog post instead.

It’s difficult, I understand the negative Letterboxd reviews about how the second half is basically “torture porn”, and that it’s not easy to watch, but those same people have films like Trainspotting, Manchester By The Sea and Whiplash as highly rated films, films that are unarguably also about self-torture - but those are actors within a work of fiction, this is someone actually breaking down in front of them, when its fake it’s a thought provoking exploration, and when it’s actually happening (and therefore more a more genuine representation) it’s somehow “too far”. In reality, in making works like Whiplash, Manchester By the Sea and others, the creators have to put themselves in the mental state of their characters, they may not literally be addicted to drugs, lose their families, push their career so hard that they almost die for it, but they have to put themselves into the shoes of people in those situations and in that way a piece of their suffering as a creator is in that work, as (relatively) miniscule the suffering and fictional as the outcome is. Don’t get me wrong, I understand that it’s a far lesser suffering than those who actually go through those things, but my point is that for characters to suffer in great works of writing, the creator might be suffering a little too. I really don’t want to contribute to the tortured artist myth though, this may not be the case for many/most creators, I don’t want to say that to create great work you have to suffer. But sometimes the most emotionally convincing stories come from experience, imagined or real, no matter how factual or fictional the outcome. Bo Burnham is also seeing help, he mentions this in the special, he mentions how he was okay, but as he’s forced to perform for his worst critic (himself), he stoops back into his old mental state. Bo Burnham has a support network, he has gotten better once, and he will learn from this experience. Burnham set up his environment for making this special, was not at risk of self-harming, he wasn’t at risk of substance abuse, he is fine, and he wouldn’t have published it if he wasn’t personally comfortable with having it published. He made the film completely on his own terms in a safe environment.

Anyway I’ve already dragged on a bit, so I’ll leave it here. Since I’m on the topic of “the tortured artist”, I will note that some artists (especially animators for violent games) are made to literally watch torture to make their work more realistic. I don’t quite know what my point with that is in relation to Inside and Bo Burnham, but I feel like people should know about that.