If you haven’t played Genesis Noir yet, then give it a shot, it’s an interesting experience thats only a few hours long and it’s available on Xbox Game Pass right now (and I will be talking spoilers here, so just play it already!!)

The game is kind of exactly what the title implies, its a Noir detective story but intertwined with the story of creation (the scientific story, not the biblical one) and it explores the philosophy and theory that fills in the gaps of our current knowledge (which is always the most interesting part for me). I love philosophical/sci-fi YouTube channels like exurb1a, who take existensial sci-fi & philosophy and turn it into a narrative to follow along and help you understand, so the blurb of this game is 100% right up my alleyway, but it even had a few surprises for me.

(UPDATE: I recently found out that exurb1a is a terrible human being! If you were interested in his content based on this blog post, then I urge you to not support him in the future, thanks!)

The biggest surprise of which was the format of the game. For some reason I was expecting the Noir and Sci-Fi elements to be more closely linked (might be a poor choice of words but stay with me), its not that there was two stories running parallel, the two elements interacted a lot, it’s the way that they interacted made the two concepts feel slightly separated. There’s the occasional visual simile to be appreciated, like how the golden ratio pops up in unusual places in both the detective-y bits and the sci-fi bits, but outside of the black and while-esque aesthetic and the character design, the Noir aspect only shows up in the setup for the narrative. It is primarily an exploration of the timeline of the universe, with a Noir aesthetic. (I’m also not much of a film Noir expert so maybe I’m wrong here, but this is just what I was thinking while playing). And this isn’t a bad thing either by the way, I’m just explaining how it’s different to what I was expecting. As the game went on I actually ended up quite liking the story, or that of it that I understood, which brings me to my only quarrel with the game, their mostly visual storytelling didn’t really communicate all too well why things were happening.

Now this may have been the point (that existence is seemingly random and things just happen), but especially in the middle to later stages of the narrative, it’s difficult to gauge what the characters motivations are what they’re tying to do when the storytelling is so vague and non-descript. I’ll talk more about the visuals themselves in a bit, but the content of the visuals often felt needlessly abstract, and they just weren’t very communicative in terms of narrative. They communicated the theme perfectly though, it really felt like “Interstellar but film Noir but also Star Trek”, but I just feel like if they toned some of the visuals down a bit and things would be a bit clearer. The gameplay didn’t really help to eleviate this feeling either, it reminded me a lot of (Gorongoa)[http://gorogoa.com/], another point and click game where you solve simple visual puzzles to unfold something of a narrative, except I felt like I had less control over what was happening. The puzzles aren’t exactly difficult, but like other point and clicks, it can be annoying trying to find the exact thing the designers wanted you to click on. As a result Genesis Noir feels less interactive than most other on-rails narrative games. 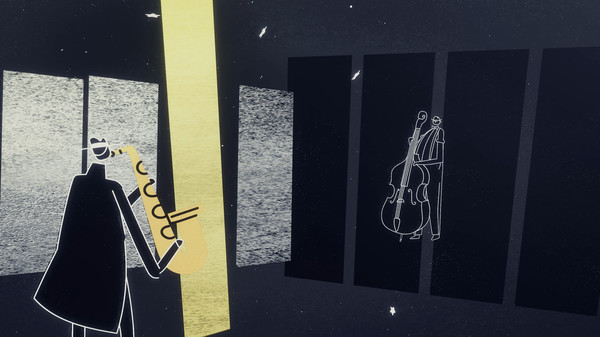 Why should you play Genesis Noir then?

The visual design of this game is perfect, without a doubt, they capture the theme and tone perfectly, the abstract scenes look amazing and the way that everything moves on screen is perfect. It’s mostly 2D, with the occasional 3D element for interactive objects like the player model and other interactables. It feels like a very graphic designer-y style, with its minimalism, and abstract minimal animations. In theory lots of what’s happening on screen isn’t too technical, there’s a few effects that I’m interested in how they implemented though, and it’s the way that they show many different points in time/alternate universes at once, they could do that with Unity Prefabs (or something similar), or if they’re doing it more procedurally. The scene transition effect is also pretty interesting, it looks pretty complicated but I’m kind of certain that it’s a simple fragment shader that moves distorts the pixels based on their coordinates, giving a 3D-like effect. I’m also interested in their black hole shader, which is used towards the end of the game! I’ll definitely try to make something similar to that soon as a programming exercise, and I think I want to try it in Unreal, since lots of UK studios prefer Unreal, so I should probably learn it (also this game was made in Unreal, I believe)!

I’d 100% recommend playing this game to anyone interested in existential sci-fi/philosophy, anyone that generally likes indie games, and if you like this game then I’d highly recommend the YouTube channel exurb1a, who’s video and book content gives off similar vibes! I’ll be eagerly watching out for Feral Cat Den’s next project :)