I remember playing the original Assassin’s Creed on my PS3 when that was brand new and I loved it, easily one of my favorite games of that generation. I also remember sticking around and playing Assassin’s Creed 2, which was a fantastic game, I still remember so many little details about that game, it’s kind of weird. But somewhere around Assassin’s Creed 3, I, like many others, lost interest in the series. I liked the lore of the world, how the biblical/creationist stories were integrated in the story, I liked that they were playing around with an interesting scientific concept not really seen often in media, “genetic memory”, and I liked the satisfying parkour/sneaky assassin style gameplay. It was just an all-around “good game”

Skip forward a few years and hear about the tenth game in the series, “Origins” - well now I have to play that, I love the lore of Assassin’s Creed, I need to find out how it all began! To cut a long story short, this game was not for me. The only thing that it shares with the original games is its world and a third-person perspective. Though that’s not a bad thing in of itself though, the reason I got bored of the series is because it was repetitive as fuck, new gameplay should feel refreshing - I just don’t like the changes that have been made.

Part of why the original games were great is because it encouraged being sneaky over just straight-up fighting people, and part of how it did that was making it so that sneaking up behind people and knifing them in the back was an instant-kill, that is not the case anymore. Instead, Origins embraces some RPG mechanics, now your character and the enemies have levels, if your level is a certain amount of levels higher, you’ll still get that instant-kill, otherwise, you won’t and you’ll have to fight them with its bog-standard combat system. I found that since I was just trying to play through the main story missions, the levelling system just served to hold me back - it completely broke any momentum and interest for the story I had because for every hour I played, I’d have to grind on side missions for 2 more hours to get to the correct level for the next mission. In the end, I turned on cheats so that I could artificially lower everyone’s levels to be equal to mine and skip the grind, which made the game much more enjoyable, and much shorter.

On a more positive note, the environment design is absolutely gorgeous, I really can’t show you how great this game looks without you playing it, but the setting they chose is perfect and their execution of it is flawless. The world truly does feel real and lived in, with NPC’s that actually do things in the world, a day/night cycle that actually has an impact on what’s happening, Ubisoft has created an actual world here. You may have to find people for a mission and depending on what time it is they could be doing a number of things in a number of places. It’s pretty great. Every named person (of which there are a lot) has clearly had a lot of thought put into them and what their lives would be like. It is such a great and incredibly detailed depiction of late Ancient Egypt. It was actually weird to see Alexandria for the first time, in my mind Ancient Egypt was nowhere near the Roman Empire timeline-wise, but in reality, they actually had a lot of political tensions and Origins depicts those well too. 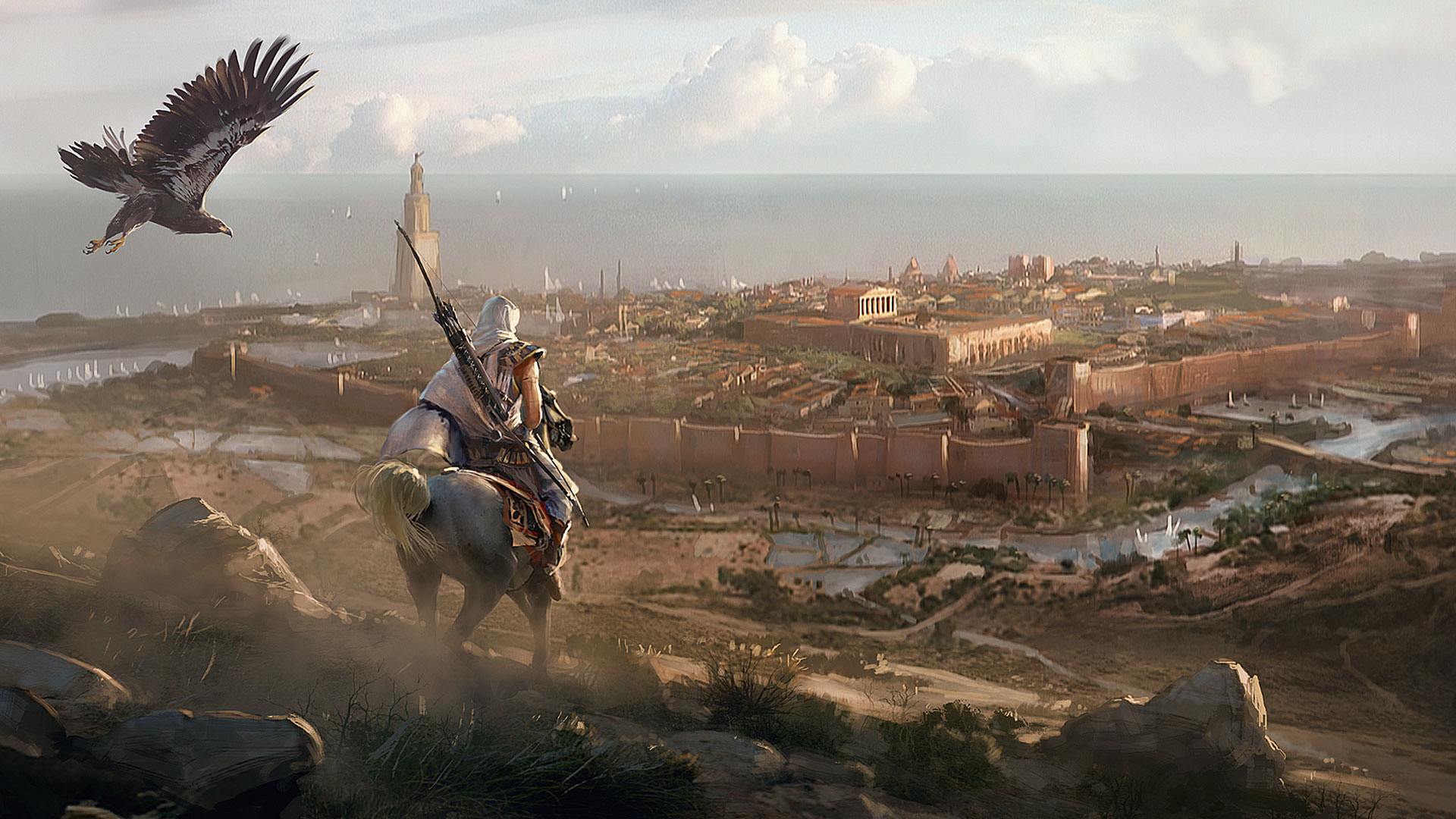 Anyway, Origins is lucky it has a cheats option, otherwise, I would call this game unplayable (but it is absolutely gorgeous).

Assassin’s Creed: Origins is available on Uplay/Steam for PC, Playstation 4 and Xbox One and is probably worth playing if you’re interested in Ancient Egypt.

I respect these guys for making something they thought was deep, but they lost the point somewhere in the planning phase and managed to become exactly what they are trying to criticise. The whole point of this game is that you are pretending you’re “the hero soldier” as if all the event’s that happen in the game are all in your head. You end up killing hundreds of people, including your friends, to get at “the bad guy”, only to find out that you’ve been imagining him up the entire time (as well as misunderstanding every situation for the entire length of the game)

The game says in its description that it gives the players choices, but it really doesn’t. You are always forced into making the decision that ends up being less moral. At one point you are forced into blowing up an entire military camp for no reason, there is no other way around it, I know because I looked for at least 20 minutes to find a different option. But the game having a linear story isn’t the end of the world to be fair, I normally like a curated linear story, but I also don’t like it when a game advertises choice when there is none.

As a concept, the game seems like a great idea, a modern military shooter that shows how garbage and psychotic all the other military shooters are. My issue is that for 90% of the game, it is just a by-the-books military shooter. It’s a shit claiming it’s a gem because it realised all the other shits were shit. It only deviates from the standard military shooter experience in the last hour of gameplay when the game says “a-ha, I got you! He’s actually crazy and has just been imagining everything! Aren’t I smart?! Oops you killed so many people!”. To that, I say “fuck you”, it’s so lazy, they might’ve well just said “it was all a teenager’s dream sequence” and it would’ve been equally impactful. The military shooter genre was born to show the horrors of war, what Spec Ops is doing is the most basic thing that a military shooter should strive to do (yes I know that the genre is insanely oversaturated but even Call of Duty still tries to do this), I don’t entirely get why it gets so much praise.

Uhhh graphics are “eh”, the story is “eh”, the gameplay feels clunkier than a knock-off Rubriks Cube.

Spec Ops: The Line is available on Steam for PC/Mac/Linux, Playstation 3, and Xbox 360 and I wouldn’t really recommend it.